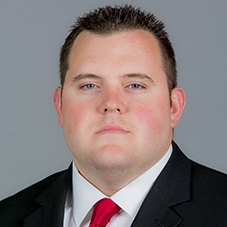 Eric Mateos is in his third season at Arkansas as offensive graduate assistant.

Mateos spent the past two seasons working closely with a Razorbacks’ offensive line that has led the SEC in fewest sacks allowed both years. In addition to protecting the quarterback, Mateos has helped the offensive line become devastating run blockers.

Despite having just one senior starter up front, Arkansas was the only school in the nation to boast two 1,000-yard rushers in 2014. The Razorbacks rushed for 400-plus yards in back-to-back games and the offensive line helped pave the way for Alex Collins’ 212 yard effort at Texas Tech, the ninth-best single-game rushing performance in program history.

In his first season, he helped tutor the Razorbacks’ offensive line that led the SEC in fewest sacks allowed while producing a first-team All-American and two Freshman All-Americans.

Before arriving in Fayetteville, Mateos was offensive line coach and recruiting coordinator at Hutchinson Community College, a post he earned following the 2012 season. In 2012, he was the tight ends coach and assistant offensive line coach, tutoring Devonte Danzey, who was ranked as the No. 1 junior college offensive guard prospect in the country, and Solomon Normore, who signed with New Mexico. The Blue Dragons broke or tied 15 Hutchinson game or season records on offense that year, including single-season team pass completions and individual single-season passing yards, total offense, rushing yards and receptions.

Mateos began his coaching career at Southwest Baptist University as the assistant offensive line coach in 2011. That year, the Bearcats averaged 25.5 points and 376.7 yards of total offense per game while earning six victories. The offense featured a balanced attack that rushed for an average of 154.8 yards per game and averaged 221.9 yards per game passing.

Mateos transitioned into coaching after playing the 2009 and 2010 seasons at Southwest Baptist. He was the starting center and a team captain both seasons and helped lead the Bearcats to the best two-year stretch in school history. In 2010, the offense ranked third in the country with an average of 504.7 yards of total offense per game. In 2009, Southwest Baptist averaged 482.0 yards of total offense per game, totaling more than 200 yards per game rushing and passing, to rank fifth in the nation. He began his playing career with two years at Hutchinson, where the 2008 team advanced to the Region IV championship game.

Mateos earned his bachelor’s degree in public relations from Southwest Baptist in 2011.