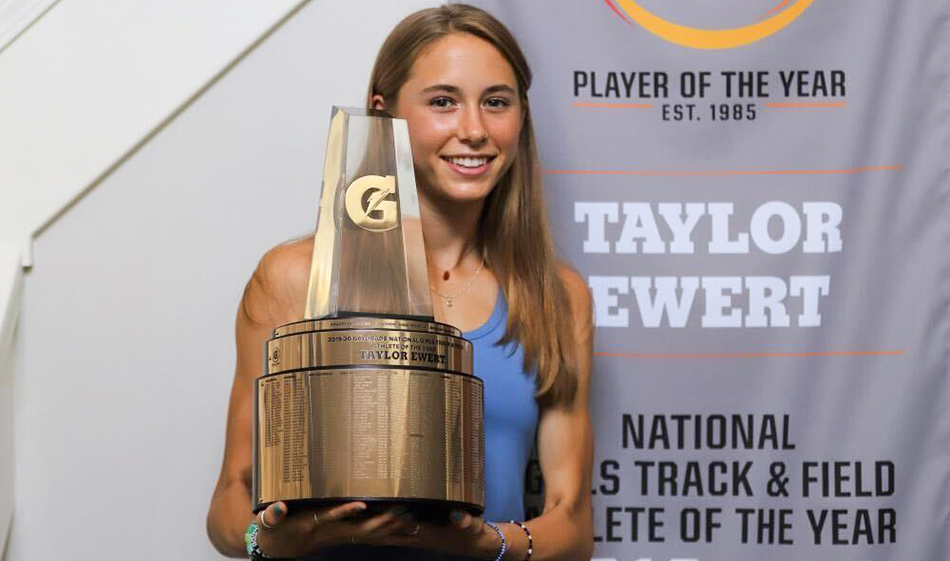 Incoming Arkansas freshman Taylor Ewert has been selected as the 2019-20 Gatorade National Girls Track and Field Athlete of the Year, announced Tuesday by The Gatorade Company in its 35th year of honoring the nation’s best high school athletes.

Ewert, of Beavercreek High School in Ohio, previously claimed Gatorade State Athlete of the Year honors in Ohio for cross country, twice in 2018 and 2019, as well as track and field in 2020.

Now Ewert is a finalist for the most prestigious award in high school sports, the Gatorade Female High School Athlete of the Year award, which is announced in July.

“This is unique for us to have someone joining us who has been named the national athlete of the year,” noted Arkansas women’s head coach Lance Harter. “Taylor is an athlete who has options and is one of the future greats for racewalking in the United States.

“She can transfer those talents into cross country as well as in track and field. She would really like to hone in on the 3,000m steeplechase and 5,000m.”

The list of previous Gatorade National Athlete of the Year honorees in track and field include Olympic and World champions and medalists among an elite list of athletes in the sport. A selection of previous winners includes Joanna Hayes, Sanya Richards-Ross, Allyson Felix, Bianca Knight, Chanelle Price, Kendell Williams, and Sydney McLaughlin.

Taylor Ewert is only the fifth female distance athlete of any kind in the 35-year history of the Gatorade awards program to earn the National Track and Field Athlete of the Year.

Razorbacks Who Were Gatorade National Athlete of the Year

The award, which recognizes not only outstanding athletic excellence, but also high standards of academic achievement and exemplary character demonstrated on and off the field, distinguishes Ewert as the nation’s best high school girls track and field athlete. A national advisory panel comprised of sport-specific experts and sports journalists helped select Ewert from more than one million other student-athletes who compete in girls track and field nationwide.

“Despite so many sport seasons being canceled or cut short due to the coronavirus pandemic, the Gatorade Player of the Year program continues to recognize and celebrate the nation’s most elite student-athletes for their incredible accomplishments on and off the field,” said Gatorade Senior Vice President and General Manager Brett O’Brien.

“Taylor Ewert is a leader and role model in her sport, the classroom and her community and we look forward to seeing her continue to succeed in both sports and life.”

Ewert led Beavercreek to a pair of state team championships during her junior and senior seasons and became the first female runner to place in top 10 at both Nike Nationals and Foot Locker Nationals in consecutive years.

In the 2019 outdoor season Ewert won the 2,000m steeplechase at the New Balance Nationals in 6:33.61, which ranked her as the fifth-best performer with the ninth-best performance on the all-time high school list.

International competition for Ewert has included being a member of the United States team twice at the Pan Am Juniors, held in Trujillo, Peru (2017) and San Jose, Costa Rica (2019), as well as the 2018 World U20 Championships in Tampere, Finland. Ewert ranked No. 1 on the U18 world list for the 10km racewalk in 2018 when she placed 10th in the World U20 Championships with a 45:57.81.