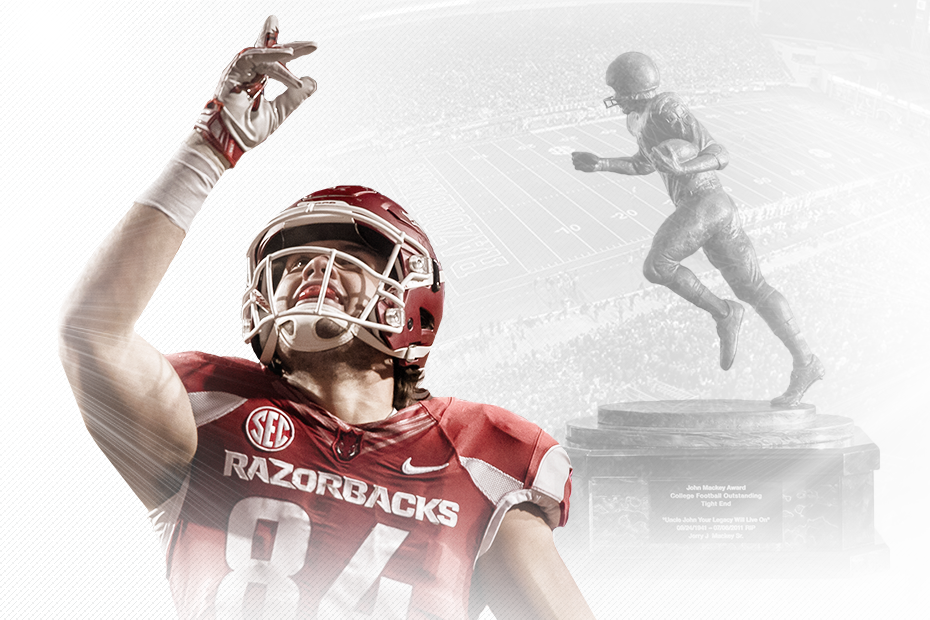 The Best Tight End In The Nation

Since the preseason, that’s what college football’s top coaches, NFL Draft analysts, national media members and fans across the country have called him. No one ever questioned it. But today, it’s official. Arkansas junior tight end Hunter Henry has been named the 2015 John Mackey Award winner as the nation’s most outstanding collegiate tight end, the Friends of John Mackey announced on Wednesday.

Henry is the second Razorback in school history to earn the honor, joining 2010 recipient D.J. Williams and making Arkansas the only school to produce multiple winners since the award’s inception in 2000.

“It’s an honor and a blessing to win this award,” said Henry. “I’m very thankful to my lord and savior Jesus Christ, my family and friends, my coaches that helped me get to this point, my teammates and the University of Arkansas. This is a tremendous honor and I’m glad I’m able to represent the university and state of Arkansas in this way. It’s a dream come true to win this award and I can’t say how thankful I am.”

The Razorbacks’ second leading receiver’s dominating performance (seven catches, career-high 129 yards and two touchdowns) against Mississippi State on Nov. 21 helped him surpass his 2013 and 2014 season totals for receptions and receiving yards. For the season, Henry has totaled 46 receptions for an FBS-leading 647 yards among tight ends and three touchdowns.

The focal point of Arkansas’ 4th and 25 conversion in overtime at No. 19 Ole Miss, Henry is one of senior quarterback Brandon Allen’s most reliable targets and go-to playmakers. He has a reception in 22 straight games, which is the longest active streak among SEC tight ends and fourth longest among FBS tight ends. In the last two-plus seasons, he has been targeted 182 times, reeling in 111 passes for 1,569 yards, good for 61 percent and 8.6 yards per target.

Through 12 games this season, Henry is hauling in 68 percent of his targets, averaging 9.5 yards per target, which leads all SEC tight ends and placing him fifth among FBS tight ends (first among Power 5 and Mackey Award finalists; minimum 25 receptions).

Henry has not dropped a pass through 12 games this season and has showcased his strong hands throughout his career, dropping just six of his 182 (3.3 percent) looks.

His 111 receptions and 1,569 receiving yards through the past three seasons is tops in the SEC among tight ends. He is one of just three Arkansas tight ends to eclipse the 1,000-yard plateau, joining Williams (1,855 yards from 2007-10) and Chris Gragg (1,003 yards from 2008-12). With 111 career receptions, Henry is one of just eight tight ends in league history to reach the triple-digit mark while playing in the SEC. Of those eight, he is one of four to also rack up more than 1,500 receiving yards.

Henry has been especially dominant on third down. Of his 1,541 career receiving yards, 579 (37 catches) have come on third down – more than any other down. His receptions on third-down passing plays result in a first down or touchdown 97.3 percent of the time (34 first downs, 2 touchdowns).

Among all FBS tight ends, Henry ranks first in the following third down categories: Receiving yards (250), first downs (14) and 15-plus yard catches (8). He also leads all SEC receivers in third down receptions, which ranks fourth among FBS tight ends.

An every-down tight end, Henry has been on the field 95 percent of Arkansas’ offensive plays on the season, including 443 of 470 run plays and 335 of 348 pass attempts. As a blocker, Henry hasn’t allowed a sack or even a quarterback hurry this season. His ability in the run game has helped Arkansas rush for more than 200 yards in an SEC-best six league games this season.

But it’s not just about football for Henry. The Little Rock, Ark. native is one of the team’s off-the-field leaders as well and a tremendous ambassador for the Razorbacks, the University of Arkansas, and the Natural State.

During his three seasons in his home state, Henry visited the Arkansas Children’s Hospital multiple times and was an active participant in the “Book Hogs” reading program at Holcomb Elementary in Fayetteville, Ark. Henry also took part in other community service events including the Read Across America program, Lift Up American in NWA, Special Olympics, NWA Veterans Hospital and the Boys & Girls Club.

The John Mackey Award trophy will be presented to Henry live on Dec. 10 at The Home Depot College Football Awards Red Carpet Show on ESPNU.