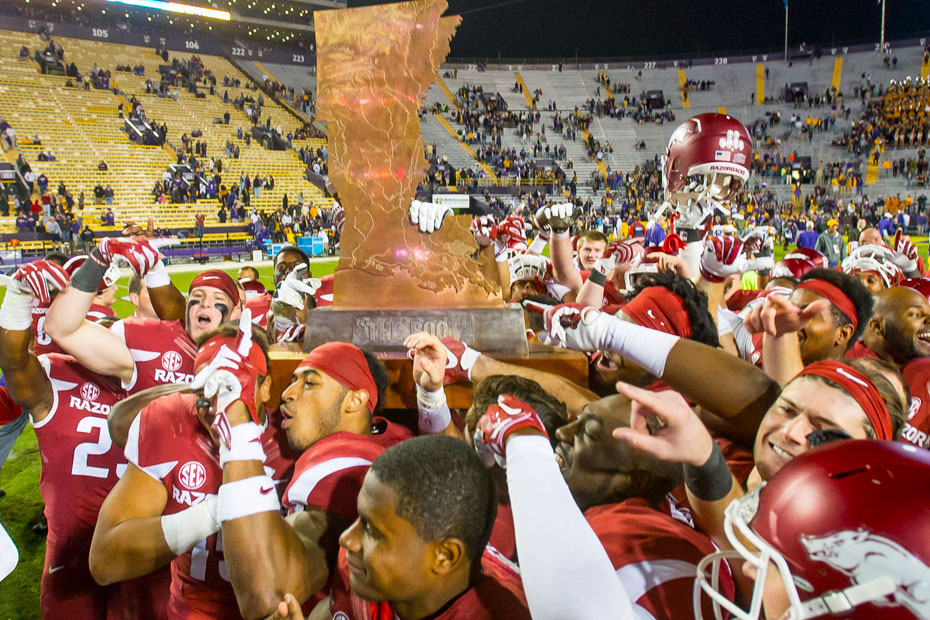 The Boot is Coming Back Home

BATON ROUGE, La. – In front of an electric crowd of 101,699, Arkansas knocked off No. 9 LSU 31-14 at Tiger Stadium Saturday night, keeping the Golden Boot for the second straight year for the first time since 2007-08.

The win improved the Razorbacks to 6-4 overall and 4-2 in league play, making them bowl eligible for the second consecutive season.

Arkansas manufactured 440 yards of total offense and limited LSU to 330. Credit the defense, which sacked LSU quarterback Brandon Harris five times and harassed him into throwing one interception. Freshman linebacker Dre Greenlaw paced the Razorbacks with 12 tackles – his fourth double-digit tackle performance this season – while junior defensive lineman Deatrich Wise tallied a career-high 2.5 sacks – the most by a Razorback in an SEC game since Trey Flowers had 3.5 at Auburn in 2012.

Senior quarterback Brandon Allen finished the day completing nine of his 16 passes for 141 yards and a touchdown, while Arkansas also grounded out 299 rushing yards. Junior running back Alex Collins was responsible for a bulk of the damage with 141 yards on 16 carries, followed by Kody Walker with 88.

With his production, Collins surpassed Dickey Morton (3,317) for third in program history with 3,335 rushing yards for his career. The Fort Lauderdale native has now eclipsed the 100-plus yard mark on the ground in 8-of-10 games this season, which is the second-most in a single season in program history just behind Darren McFadden’s 10 in 2007.

The Razorbacks jumped out to an early 7-0 lead with 8:06 left in the first quarter after Allen threw a 52-yard touchdown pass to junior wide receiver Dominique Reed. Reed finished the game with three catches for 83 yards and one touchdown and now has a touchdown in six straight contests.

After holding LSU scoreless on the ensuing possession, Collins exploded for a season-long 80-yard touchdown run, putting him over 100 yards on the ground for an SEC-leading eighth time this year.

The Razorbacks got the ball back after Greenlaw forced a fumble that was recovered and returned to the LSU 11 by Brooks Ellis. It took Collins just two plays to break through into the end zone and extend Arkansas’ lead to 21-0 at the 3:55 mark in the second quarter.

The Tigers finally found the end zone when Harris capped a nine play, 83 yard drive with a 5-yard touchdown pass to Malachi Dupre with 24 ticks left in the first half.

On their first possession of the third quarter, the Tigers marched 67 yards down the field in eight plays, getting a 2-yard touchdown run from sophomore running back Leonard Fournette to close the gap 21-14.

The Razorbacks responded with a 25-yard Cole Hedlund field goal.

With just over 10 minutes remaining in the fourth quarter, sophomore wide receiver Jared Cornelius broke off a career-long 69-yard touchdown run to make it 31-14.

Looking to trim the deficit, LSU marched down to the Arkansas 11, but junior defensive back DJ Dean picked off LSU’s Harris in the end zone to essentially close the door.

Arkansas’ offense efficiently ran out the final three minutes and 26 seconds of the game by rushing five straight times and completing a 13-yard pass for a first down on the final possession.