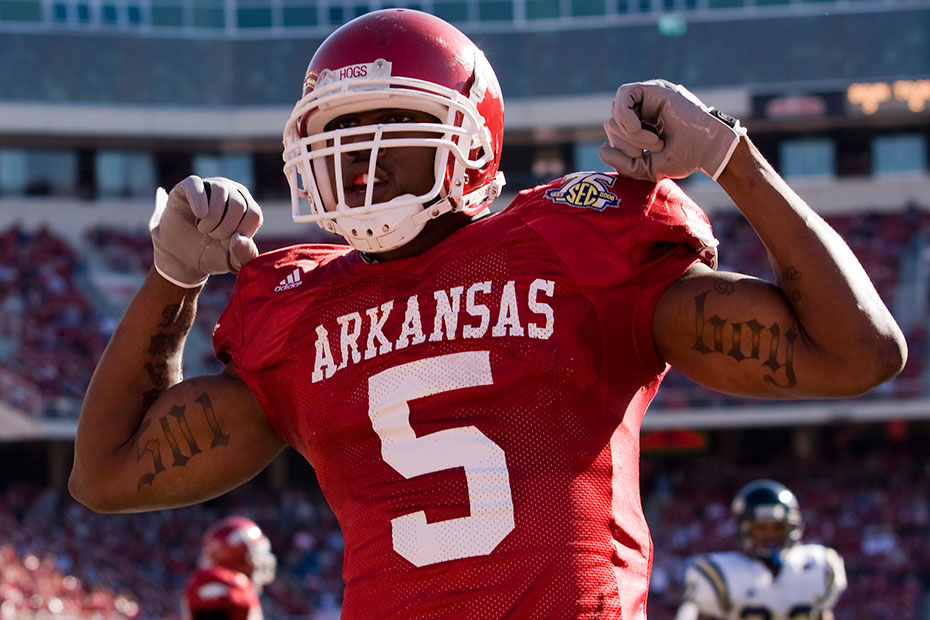 IRVING, Texas – Former Arkansas football standouts Brandon Burlsworth, Dan Hampton and Darren McFadden were among the 82 players and coaches from the Football Bowl Subdivision included on the 2019 ballot for induction into the College Football Hall of Fame, the National Football Foundation (NFF) & College Hall of Fame announced Monday.

Burlsworth went from a walk-on to an All-American offensive lineman and eventual third round pick by the Indianapolis Colts. The Harrison, Arkansas native played on two Southeastern Conference West division champion teams in 1995 and 1998. He earned All-SEC honors in 1997 and 1998, becoming the Razorbacks’ first First-Team All-American since 1989 when he was named to the first-team in 1998. His No. 77 was retired in 1999 following his death. He was inducted into the Arkansas Sports Hall of Fame in 2002 and the University of Arkansas Letterman’s Association Hall of Honor in 2004.

Hampton was a four-year letterwinner at defensive tackle for the Razorbacks (1975-78). He played two seasons for Coach Frank Broyles (1975-76) and finished his career playing for Coach Lou Holtz (1977-78). Arkansas sported a 35-10-2 record during Hampton’s career, including a mark of 22-8-1 in Southwest Conference (SWC) play. Hampton totaled 239 tackles (126 unassisted tackles) in his career with 32 being behind the line of scrimmage while recovering six fumbles. He was an AFCA First-Team All-American in 1978 and helped Arkansas to finish third nationally after winning the 1978 Orange Bowl.

One of the most dynamic running backs in college football history, McFadden starred at Arkansas from 2005-07. He holds several school records, including rushing yards (4,590) rushing touchdowns (41) and 100-yard rushing games (22). He finished Heisman Trophy runner-up in 2006 and 2007 and won the Doak Walker Award both years, given to college football’s best running back. The Little Rock, Arkansas, native became the first SEC running back since Herschel Walker to rush for 1,000 yards in each of his first three seasons. His 1,830 yards and 16 touchdowns in 2007 are both single-season records at Arkansas. He was the fourth overall selection by the Oakland Raiders in the 2008 NFL Draft.

To be eligible for the ballot, players must have been named a first-team All-American by a major/national selector as recognized and utilized by the NCAA for their consensus All-America teams; played their last year of intercollegiate football at least 10 full seasons prior; played within the last 50 years and cannot be currently playing professional football. Coaches must have coached a minimum of 10 years and 100 games as a head coach; won at least 60 percent of their games; and be retired from coaching for at least three full seasons. If a coach is retired and over the age of 70, there is no waiting period. If he is over the age of 75, he is eligible as an active coach. In both cases, the candidate’s post-football record as a citizen may also be weighed.