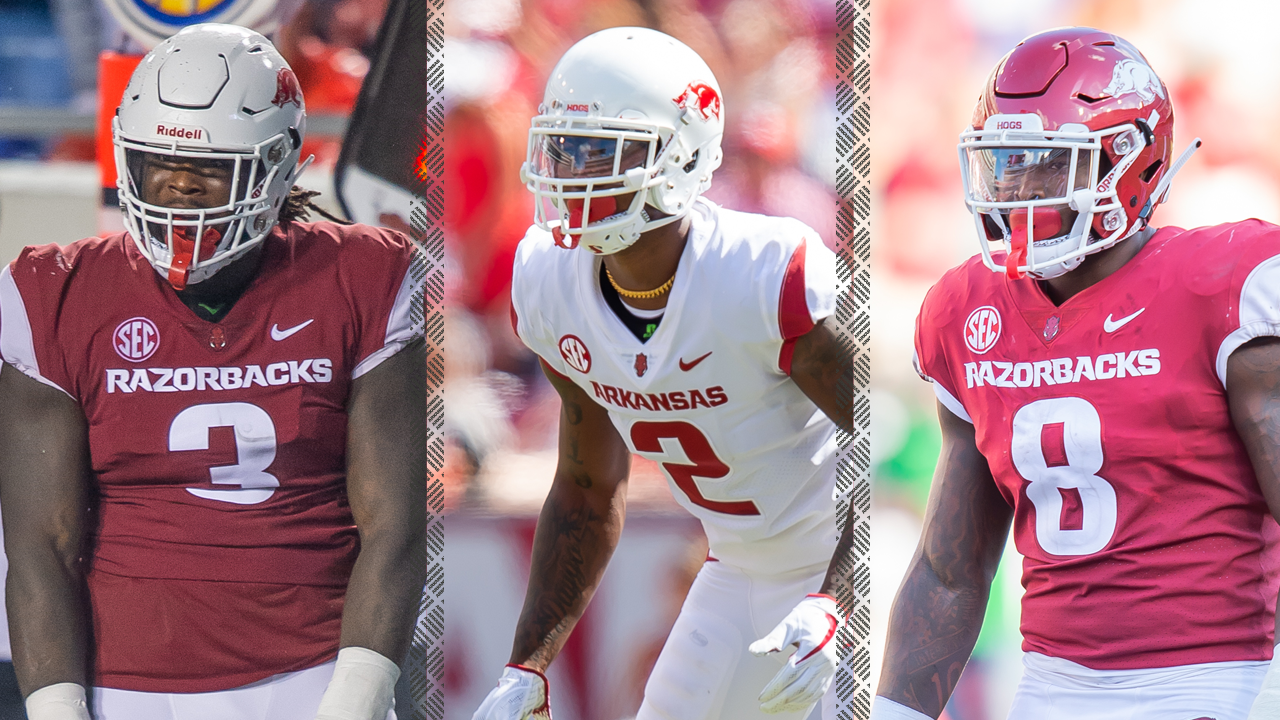 FAYETTEVILLE, Ark. – Three members of the Arkansas football team have been named to the 2019 Preseason Coaches All-SEC Team.

Senior linebacker De’Jon Harris was selected to the second team defensive squad, while senior defensive lineman McTelvin Agim and junior defensive back Kamren Curl were placed on the third team unit by the league coaches. After SEC Media Day, Harris (second) and Agim (third) were picked to the media’s preseason all-conference squad.

From Harvey, Louisiana, Harris led all conference defenders in total tackles and solo stops during the regular season last year, posting 118 and 62, respectively. It marked back-to-back years Harris has paced the Razorbacks in total tackles, recording 115 the year before. He was the first Arkansas defender since Jerry Franklin (2010-11) to hit 100 tackles in consecutive seasons.

Seven of his 12 games resulted in double-digit tackle performances last season, the most in the SEC, including five during conference action. He finished the year needing 15 tackles to crack the top 10 for most stops in a single season by an Arkansas defender. Harris also recorded nine tackles for loss, including two sacks, with five pass breakups, a fumble forced and a fumble recovered last season.

Harris’ performance in 2018 landed him on the Associated Press All-SEC Second Team. He’ll enter his senior campaign as the SEC active career tackles leader with 270, needing 60 stops to move into 10th on the career tackles list Arkansas.

Agim, a native of Texarkana, Arkansas, put together a strong junior campaign for the Razorbacks, racking up 45 total tackles, 16 unassisted, over 12 starts in 2018. He led the team in tackles for loss last year with 10, making him the first Arkansas defender to reach double-digit TFLs since Deatrich Wise Jr. in 2015.

Nearly half of his tackles for loss were sacks (4.5), as he’ll enter the season as Arkansas’ active career leader in both categories. Agim also forced a team-best three fumbles in 2018, including two at Colorado State on Sept. 8 to make him the only Razorback on the roster to force multiple fumbles in two separate games heading into the 2019 campaign.

Curl, from San Diego, California, started all 11 games he played in for the Razorbacks at strong safety during the 2018 season. He finished fourth on the team with 53 tackles, including 27 solo, with five pass breakups and a forced fumble during non-conference action.

He racked up at least three tackles in all 11 games, with five or more stops coming in six contests, five of those during SEC play. Curl posted a season-high nine total tackles on Sept. 22 at Auburn, which featured four solo stops.

The Razorbacks kick off the 2019 campaign on Saturday, Aug. 31, at 3 p.m. against Portland State at Donald W. Reynolds Razorback Stadium in Fayetteville.