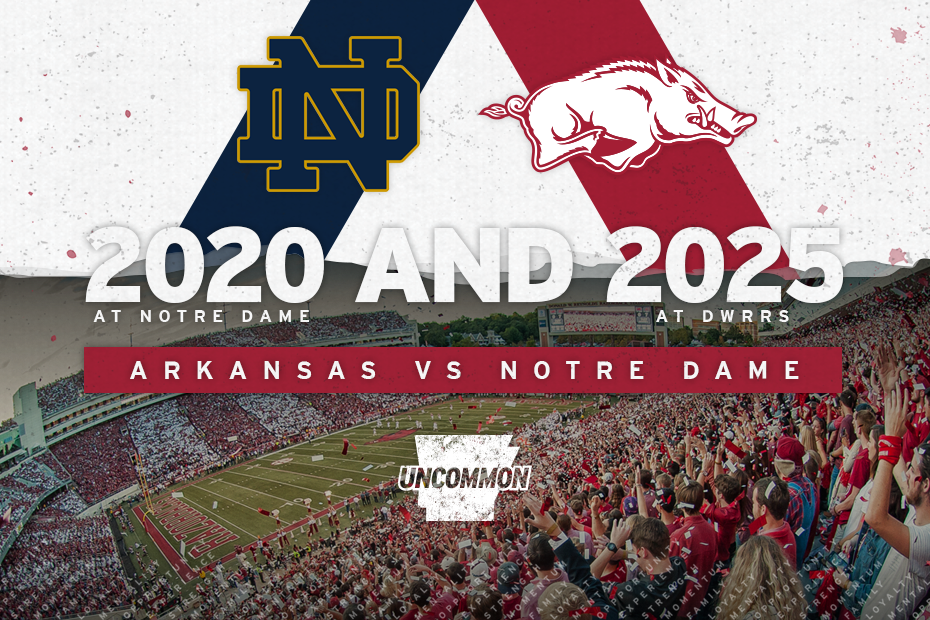 The first of a home-and-home series will take place on Sept. 12, 2020, when the Razorbacks travel to Notre Dame Stadium. The Fighting Irish will make the return trip to Fayetteville and Donald W. Reynolds Razorback Stadium on Oct. 4, 2025.

“It’s remarkable to think our historic programs have never met, but we are excited that this will change in the near future as we add the University of Notre Dame to our football schedules in 2020 and 2025,” said Vice Chancellor and Director of Athletics Jeff Long. “This series will benefit our football program, our University and the Southeastern Conference, but more importantly it is an opportunity for our football student-athletes to compete against one of college football’s storied programs while providing a premier match-up for our fans. This series will provide a once-in-a-lifetime road trip and another memorable football Saturday at Donald W. Reynolds Razorback Stadium.

“We had been searching for a marquee home-and-home opponent that would begin with an away game match-up to balance our home game with the University of Texas in 2021. When a shared open date during the 2020 season became available, it was an opportunity that fit well into our future scheduling and we didn’t want to pass up. We worked quickly to schedule the initial game of the series at Notre Dame in 2020 and then worked to identify the first opportunity for our home game. Based on previously arranged scheduling commitments, the first opportunity for the series game in Arkansas was during the 2025 season.”

“Ever since I became a head coach I’ve wanted to get Notre Dame on the schedule and when it became a possibility we were 100 percent in on getting a home-and-home done,” head coach Bret Bielema said. “I’m excited for our program, but I’m also excited for our fans to experience a game at Notre Dame and then come back and show what an amazing home atmosphere we have.”

Arkansas will receive an allotment of 7,500 seats for their road game in South Bend. Notre Dame will receive the same in 2025.

One of the most successful college football coaches in the history of the game, Lou Holtz amassed a career record of 243-127-7 in his 34-year collegiate coaching career. From 1977-83, Holtz led the Razorbacks to a record of 60-21-2 in his seven seasons in Fayetteville. His .735 winning percentage at Arkansas ranks second in school history among coaches with at least four seasons at UA, and his 60 wins rank as the third-highest total at Arkansas. He led the Razorbacks to the Southwest Conference co-championship in 1979 and finished in the Top-10 of the Associated Press poll three times, highlighted by a No. 3 final ranking in 1977.He was inducted into the Arkansas Sports Hall of Fame in 1983, College Football Hall of Fame in 2008, the Cotton Bowl Hall of Fame in 2012 and the UA Hall of Honor in the Fall of 2016. Holtz, who coached Notre Dame from 1986-96, is the only coach in NCAA history to lead six different programs to a bowl game and the only coach to guide four different programs to a Top-20 finish.