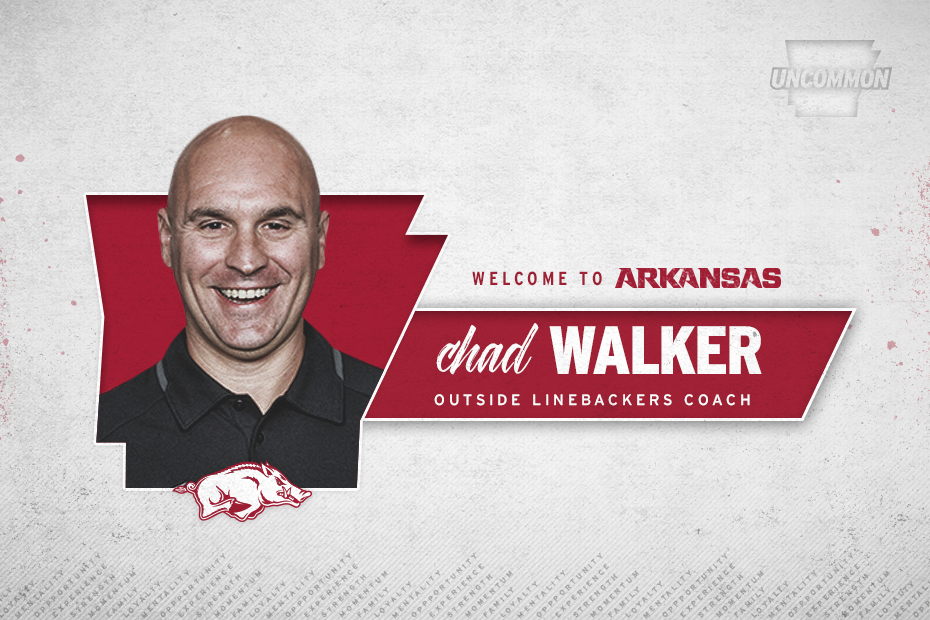 Walker’s coaching career started as a graduate assistant at Louisiana-Monroe and West Virginia before returning to his home state where he was a defensive assistant on LSU’s 2003 National Championship team. The New Orleans native’s collegiate coaching background also includes three years at Bryant University (2008-10), three years as defensive coordinator at Mississippi College (2011-12) and two years as defensive quality control assistant at Oklahoma (2013-14).

“Chad’s name was brought to my attention by several different people on the pro and collegiate level that have worked with him installing a 3-4 defense,” Bielema said. “After meeting him and going through the interview process, I’m really excited to get him on the field working with our guys and helping us transform our defense. I think he’ll hit the ground running in recruiting and I’m excited to have him join our family.”

In his first season in Atlanta, the Falcons’ went from 32nd in the NFL in total defense to 16th, while finishing in the top 10 in interceptions and red zone takeaways. This past season en route to their first NFC Championship since 1998, the Falcons tied for the NFL lead with five defensive touchdowns while outside linebacker Vic Beasley led the league with 15.5 sacks and six forced fumbles. Over Walker’s two seasons, cornerback Desmond Trufant (2015) and Beasley (2016) were named to the Pro Bowl.

His two seasons at Oklahoma featured an 11-2 record in 2013 that included a win over Alabama in the Sugar Bowl. During his three seasons as DC at Mississippi College before landing in Oklahoma, Walker coached two first-team All-Americans in cornerbacks Keith Villafranco and Jarrod Craine.

Prior to Mississippi College, Walker served as defensive backs coach at Bryant from 2008-09 before being promoted to defensive coordinator in 2010. During that time, he helped the Bulldogs to a 19-14 record over its first three years as an FCS program.

With Walker at the helm of the defense, the Bulldogs finished 7-4 in 2010 with the two biggest wins in school history over Fordham and No. 25 Robert Morris. Bryant led the Northeast Conference (NEC) in pass efficiency defense and third down defense, while ranking second in the league in turnovers gained. The Bulldogs also returned four interceptions for touchdowns on the year. Walker guided safety Max Machado to Northeast Conference Defensive Rookie of the Year honors, while cornerback Samad Wagstaff and linebacker Jason Riffe, who led the league with seven sacks, were All-NEC selections.

In 2009, Walker coached the defensive backs as the Bulldogs tallied 35 pass breakups and led the NEC in scoring defense at 17.4 points per game along with being ranked fourth nationally in pass defense. Individually, safety Andre White earned All-NEC recognition.

In his first season at Bryant, the Bulldogs finished 7-4 – the second-best record ever for a team transitioning from Division II to Division I. Bryant tied for 12th nationally with 30 turnovers gained and 29th nationally in scoring defense.

From 2005-07, Walker spent three seasons in the NFL with the Miami Dolphins as a quality control coach, working with all positions on defense. Walker worked with the defensive line in 2007 as the Dolphins finished fourth in the NFL in pass defense. In 2006, Walker helped with the linebackers as Miami ranked fourth in the NFL in total defense and fifth in pass defense. That season, linebacker Zach Thomas was elected to the Pro Bowl, while defensive end and recent NFL Hall of Fame first ballot selection Jason Taylor was named NFL Defensive Player of the Year.

Before moving to the NFL, Walker spent two seasons as a defensive assistant on Nick Saban’s staff at LSU, handling quality control duties.  During that time LSU won the 2003 SEC Championship and BCS National Championship. The Tigers led the nation in total defense in 2003 and ranked third in 2004.

Walker served as a graduate assistant at both Louisiana-Monroe and West Virginia before landing at LSU. While in Morgantown, Walker helped coach a Mountaineer defense that finished first in the nation in pass defense.

A native of New Orleans, Walker began his coaching career as a student assistant at LSU in 2000 after graduating with a bachelor’s degree in education with a concentration in kinesiology.