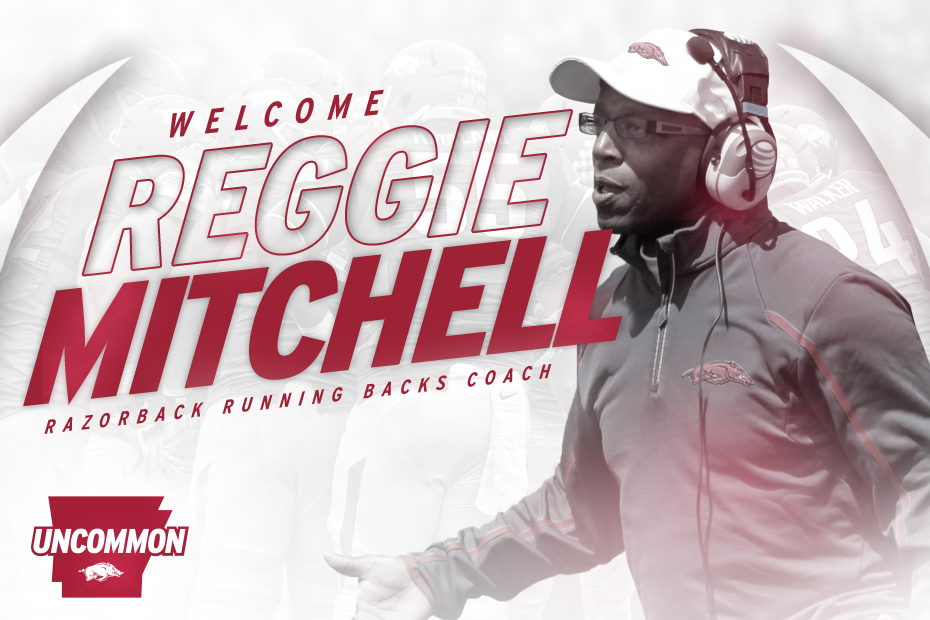 Over his career, Mitchell has coached or recruited 33 players that have been selected in the NFL Draft, including six first round picks.

“I got to know Reggie during my time in the Big Ten and he was known as a dominant recruiter,” said Bielema, “Over his career he’s recruited and developed elite running backs and athletes that had great college careers and advanced to the NFL. I’m excited about the opportunity to have Coach Mitchell join our staff.”

Arkansas and its head coach each have a rich tradition at the running back position. ESPN recently recognized Arkansas as “Running Back U” for its stream of outstanding backs. In 2015, Alex Collins added to that legacy by becoming only the third player in Southeastern Conference history to earn three-straight 1,000 yard season to start his career joining fellow Razorback Darren McFadden and Georgia’s Herschel Walker. In addition, Coach Bielema has had at least one 1,000-yard rusher in each of his 10 seasons as a head coach.

“I’m excited to be a Razorback and be a part of Coach Bielema’s program,” said Mitchell. “Arkansas is a special place with a ton of tradition, especially at the running back positon. I know there’s a talented group of running backs there and I can’t wait to get there a keep that tradition going.”

Under Mitchell’s guidance, Kansas running back James Sims completed his career third on the KU all-time rushing chart with 3,592 yards and 34 touchdowns. He became the first player in Kansas history to rush for back-to-back 1,000-yard seasons (2012-13), highlighted by leading the Big 12 in rush yards per game (112.6) in 2012. Sims’ 2012 performance led to All-Big 12 second team accolades before earning first team All-Big 12 honors as a senior in 2013 when he followed his breakout season with 1,110 yards. In 2012, Simms made up half of Kansas’ All-Big 12 backfield, as Tony Pierson was also recognized by the Associated Press and league head coaches after totaling over 1,000 yards from scrimmage.

Prior to returning to Kansas, Mitchell was the assistant head coach/recruiting coordinator/running backs coach at Illinois (2005-09). He spent five years in Champaign, Ill., helping the Illini win Big Ten rushing titles in 2006 and 2007, while the offense recorded consecutive seasons with 5,000 yards of total offense. The 2006 Illini led the Big Ten and ranked 10th in the NCAA with 188.8 rushing yards per game while the 2009 squad was 18th nationally at over 200 yards per contest on the ground.

Mitchell was at Michigan State from 1999-2004, mentoring the wide receivers in 1999 and the running backs for five seasons. He also served as the Spartans’ recruiting coordinator from 2000-04.While in East Lansing, Mich., Mitchell tutored two NFL first-round draft picks in wide receiver Plaxico Burress (Pittsburgh Steelers, 2000) and running back T.J. Duckett (Atlanta Falcons, 2002), plus recruited a third in wide receiver Charles Rogers, the No. 2 selection overall by the Detroit Lions in the 2003 NFL Draft.

In 2001, Duckett rushed for 1,420 yards – the fifth-best single-season total in school history. Duckett, MSU’s fifth all-time leading rusher with 3,379 career yards, became the first Spartan running back to be drafted in the first round (No. 18 overall) since Lorenzo White (Houston Oilers) in 1988. In 1999, Mitchell coached the wide receivers, including Burress, who set then-MSU single-season records for receptions (66), receiving yards (1,142) and touchdown catches (12).

The first of Mitchell’s three straight Big Ten stops came at Minnesota where he coached the running backs in 1997 and 1998.

Mitchell worked with the Jayhawk defensive lineman during his first stint at Kansas, focusing on the defensive ends from 1991-94. He then switched to the offensive side of the ball to coach running backs in 1995 and 1996. While Mitchell was at KU, the Jayhawks played in the 1992 and 1995 Aloha Bowls. KU produced four winning seasons in his tenure, after recording just one in the previous 11 years.

A four-year starter as a running back at Central Michigan from 1978-81, Mitchell rushed for 2,394 yards in his career and helped the Chippewas win back-to-back Mid-America Conference (MAC) titles in 1979 and 1980. He rushed for 1,068 yards as a senior.

Mitchell earned a bachelor’s degree in parks and recreation from Central Michigan in 1984. He has three children, son Kaeman and daughters Karena and Jennifer.