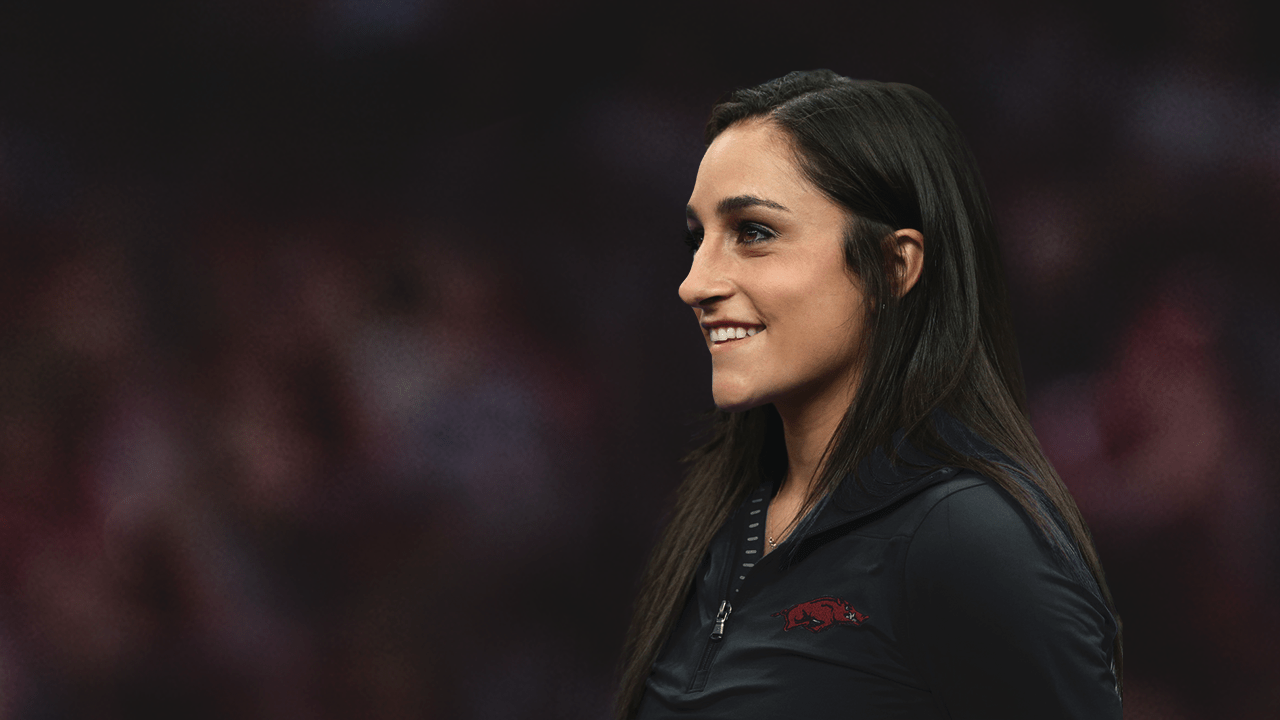 FAYETTEVILLE, Ark. – Olympic gold medalist and UCLA assistant Jordyn Wieber has been named as the head women’s gymnastics coach at the University of Arkansas, Vice Chancellor and Director of Athletics Hunter Yurachek announced on Wednesday. Wieber replaces Mark Cook, who announced his retirement as head coach, earlier this month, after 17 seasons at the University of Arkansas.

Wieber is a familiar name in the gymnastics community after a prolific career as a competitor, including earning a gold medal as part of Team USA in the 2012 Olympics. Since finishing her competitive career, Wieber has served as an assistant for legendary UCLA coach Valorie Kondos Field, helping lead the Bruins to the 2018 NCAA Championship. Beyond the gym, Wieber has served as an outspoken advocate for victims of child sexual abuse. Wieber has used the platform of gymnastics to encourage and inspire generations of young girls and others around the nation.

“The journey of Jordyn Wieber is truly extraordinary,” Vice Chancellor and Director of Athletics Hunter Yurachek said. “As one of the world’s elite gymnasts and an assistant at one of the top collegiate programs in the country, she has already experienced more than many of us will in a lifetime. She has a maturity beyond her years and her experiences at the highest level of gymnastics will be a tremendous asset to the young women in our program. Jordyn has a great energy and passion, is an accomplished communicator and a demonstrated leader.

“It was clear from the beginning of this process, that Jordyn had a definitive plan to take our program to an elite level and wanted to be the head coach at the University of Arkansas. For the past 17 years, Mark Cook built the Razorback gymnastics program from the ground up. I am confident that Jordyn will not only build on that foundation but will also serve as a recognizable face for our program and for the sport of gymnastics.”

Wieber recently wrapped up her third season as a volunteer assistant coach at UCLA and her sixth with the program, assisting the team in a variety of roles during her first three years in Westwood following her Olympic career.

The 2018 Bruins scored 49.4 or higher in 11 meets and 49.6 or higher in three meets, including a national season-high of 49.775 set Feb. 25. She and her fellow UCLA coaches were named the 2018 West Region Assistant Coaches of the Year, as they helped lead the Bruins to Pac-12, NCAA regional and NCAA national titles.

“I am honored to be joining the Razorback Family as the head gymnastics coach at the University of Arkansas,” Wieber said. “Throughout my life, gymnastics has provided me some extraordinary opportunities, from traveling the world and competing for my country at the Olympics to coaching alongside one of the legends of our sport at UCLA. Those experiences have been invaluable to my growth personally and professionally while also preparing me for this role. I am appreciative to Hunter Yurachek for affording me the opportunity to lead a nationally recognized gymnastics program within the Southeastern Conference. I am excited about the future of Razorback Gymnastics and am looking forward to working together with our student-athletes to compete at the highest level of collegiate gymnastics.”

At the NCAA Championships on April 19-20, Wieber coached Ross to the individual floor title with a score of 9.950, the program’s second in as many years after Ohashi took home the crown in 2018. After winning their semifinal session with a 197.650 (49.6125 in the floor), UCLA finished third overall in the finals.

Wieber, who has been a vocal advocate for safe sport, has won several awards in the past year, including the Arthur Ashe Courage Award at the ESPYs, the Rising Star Award by the Los Angeles Business Journal, and the Giant Steps A Hero Among Us Award.

“I’ve known Jordyn Wieber for the past eight years, through her victory as a USA Gymnastic World Champion, USA Olympic Champion and UCLA NCAA Champion Coach. Her dedication to the integrity of the process of becoming and developing champions in life through the sport of gymnastics is on par with some of the greatest leaders I’ve ever met. She has proven over and over how to achieve greatness through thorough & healthy preparation and commitment to every detail. Jordyn Wieber is simply one of the most impressive people I have ever had the honor and privilege to work with.”

“The first time I met Jordyn, I asked for her autograph. I was a fan. A few years later we became teammates on the US National Team. We bonded immediately. Jordyn has always been a supportive friend and teammate. She is a leader. I always knew she would go on to accomplish great things. I could not be more proud of her. I am excited to cheer her on in this next chapter of her life. I wish her and the Arkansas Gymnastics family the best of luck. I can’t wait to see what the coming years have in store.”

“Jordyn Wieber is a highly motivated coach of tremendous character and integrity. She is eager to learn and recognizes each day as an opportunity to do so. She subscribes to the philosophy of coaching the individual before the athlete. She brings a work ethic, knowledge, background and focus to teaching that no other gymnastics coach in the country can claim considering she is a World, Olympic and NCAA Champion.

“As a leader of young women, Jordyn will steward the Arkansas gymnastics program with a commitment to developing strong, respectable and high achieving student-athletes that will represent the university in the gym, the classroom and in the community with class and commitment to excellence, just as she has exhibited in everything she has done in her own life.”