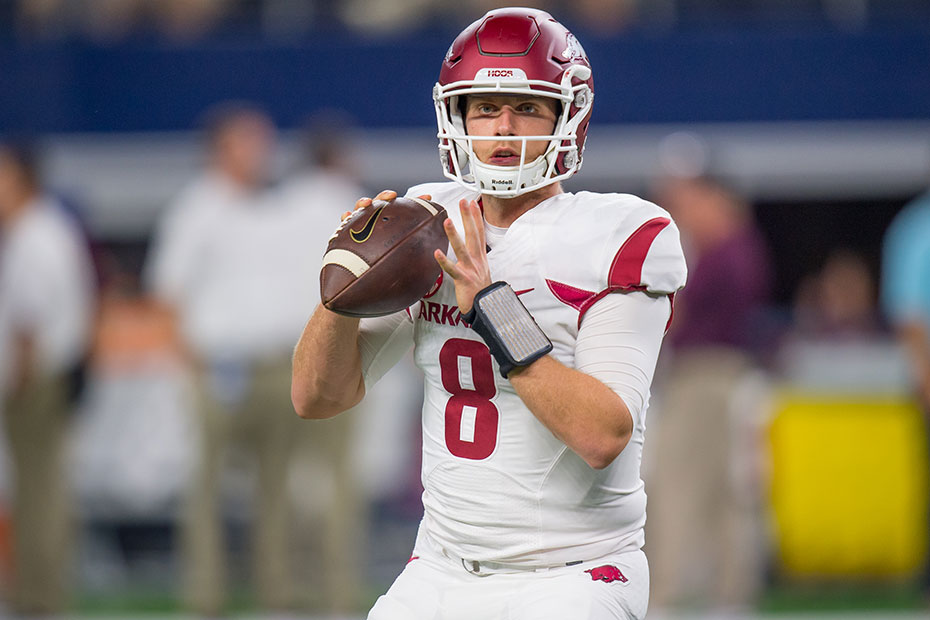 Return To The Rock: What You Need To Know

#RazorFacts
• It will be Arkansas’ first-ever game against Alcorn State.

• Head Coach Bret Bielema is 39-4 against non-conference opponents during the regular season over his 10-year head coaching career.

• The Razorbacks have won 11 of their last 13 non-conference contests dating back to 2014.

Five Key Storylines
• Arkansas landed in both the Associated Press (AP) and Amway Coaches Poll Top 25s for the third straight week. The Razorbacks will enter Saturday’s game in Little Rock ranked No. 20 by the AP and No. 22 by the coaches. It marks the first time since 2011 that Arkansas has been in the top 25 for three consecutive weeks.

• Austin Allen and Rawleigh Williams III have been one of the best QB/RB combos in the SEC this season. Allen has tossed multiple TD passes in each of the first four games, leads the SEC in completion percentage (66.9) and ranks third in passer rating (159.4). Williams has topped 100 yards on the ground in two of the last three games, ranks third in the SEC in rushing yards (433) and tied for fourth in rushing TDs (4).

• The Razorbacks’ top two receivers Keon Hatcher and Drew Morgan have combined for 535 receiving yards and four TDs through four games. Arkansas is one of only two schools in the SEC with multiple players ranking among the conference’s top 10 in receiving yards: Hatcher (8th – 281), Morgan (10th – 254).

Allen Among SEC’s Best
• On the season, Allen has completed 81 of 121 passes for 1,026 yards and nine TDs against two picks. He leads the SEC in completion percentage (66.9) and ranks third in passer rating (159.4). Those figures rank tied for 16th and 21st in the FBS, respectively. Allen is also one of 17 FBS QBs, including three in the SEC, with 1,000+ passing yards and at least nine passing TDs.

• Allen threw for a career-high 371 yards, including 156 yards in the fourth quarter alone, and two TDs against No. 10 Texas A&M. The 371 yards are the 10th-most in an SEC game in program history. His last interception thrown was in the second quarter against Louisiana Tech in the season opener (102 attempts ago). He also owns the second-best TD/INT ratio (min. 100 attempts) in the SEC this season at 4.5.

• Allen looks to become just the fifth quarterback to go at least 4-1 in his first five starts for Arkansas since it joined the SEC in 1992.

RWIII Carrying The Load
• Through four games, Williams has totaled 433 yards rushing on 88 carries, topping the 100-yard rushing mark twice. The Dallas native has found the end zone on the ground four times, which is tied for fourth in the SEC and ranks 31st in the FBS.

• Williams is one of only five players in the Power 5 conferences to total at least 400 rushing yards and four rushing TDs this season.

Sprinkle = A Touchdown Machine
• A John Mackey Award candidate, tight end Jeremy Sprinkle tied 2010 Mackey Award winner D.J. Williams for first in program history in TD catches among tight ends (10) when he hauled in his third TD grab of the season in the second quarter against Texas State on Sept. 17. The 10 touchdown receptions are tied for the SEC active career lead among tight ends.

• 30 of Sprinkle’s last 40 receptions have resulted in either a first down or a touchdown dating back to last season. Additionally, 22 of those receptions have gone for at least 10 yards, including nine for 20 yards or more.

Cornelius Goes For 100
• After missing the Texas State game with a sore back, receiver Jared Cornelius returned with career bests in catches (7) and receiving yards (126) against No. 10 Texas A&M. Cornelius is the first Razorback to eclipse the 100-yard receiving mark this season.

• Three of Cornelius’ seven catches against the Aggies went for 33 yards or more.

• Cornelius has scored a TD in six of his last eight games played dating back to 2015 with four coming through the air and two on the ground.