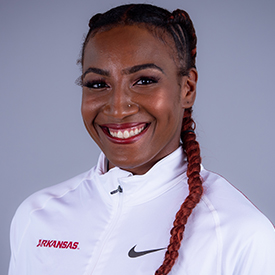 Sophomore (2017)
Second-team team indoor All-American (DMR and 4-x-400-meter relay) … Part of the first-place finishing DMR and 4-x-400-meter relays at the Vanderbilt Invitational … Finished third in the 400 in a season-best 53.89 at the Arkansas Qualifier … Set a lifetime best of 2:05.86 in the 800 finals at the SEC Indoor Championships, placing fourth for the Razorbacks … Qualified for the NCAA Indoor Championships with the DMR and 4-x-400-meter relays … Capped the indoor season with a pair of top-12 finishes at the national meet with both relay teams … Opened up the outdoor season placing seventh in the 800 at the Stanford Invitational … Assisted the Razorback 4-x-800-meter relay team to a victory at the SEC Relays … Notched two top-eight finishes (800 and 4-x-400) at the SEC Outdoor Championships, helping Arkansas to its third-consecutive Triple Crown … Wrapped up her season at the NCAA West Preliminary Round finishing 20th in the 800.

Freshman (2016)
Finished first in the Arkansas Invitational in the 600-meters where she also finished a college best time of 1:32.72… Finished top ten in the 400-meters and 600-meters at the 2016 Gladstein Invitational… Finished sixth in the DMR at the Razorback Invitational.