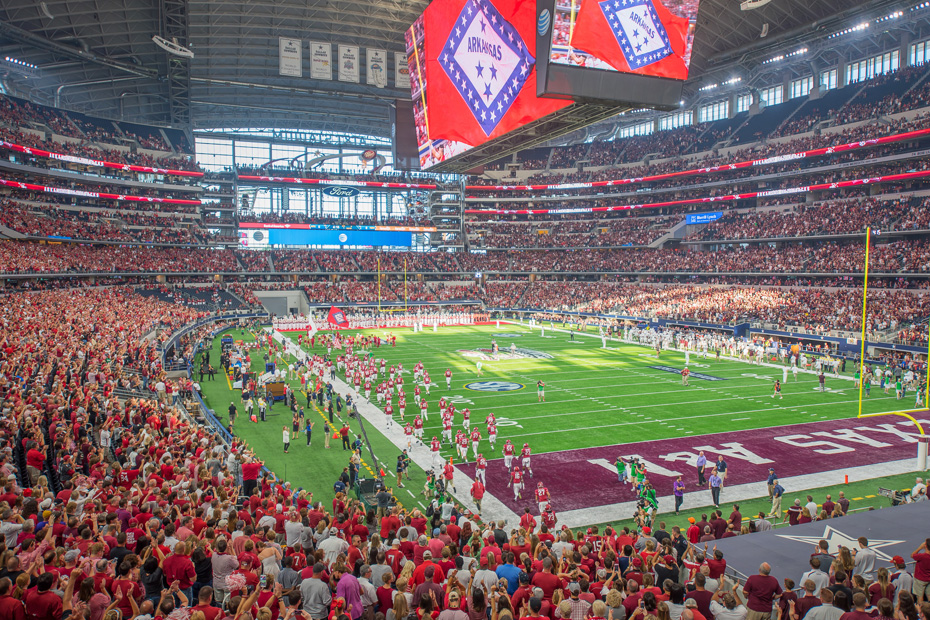 The Stage Is Set

ARLINGTON, Texas — No. 17 Arkansas will open its SEC slate in prime time Saturday as the Razorbacks return to Texas for the second time in three weeks to face No. 10 Texas A&M in the annual Southwest Classic.

The Series: Arkansas vs. Texas A&M
• Arkansas leads the all-time series 41-28-3. Saturday’s game marks the 10th time that both teams are ranked in the Associated Press Top 25 at the time of the game.

• The Razorbacks and Aggies are meeting as undefeated squads for just the second time ever and the first time since 1927.

Facts To Know
• Through his last two games played in the state of Texas, wide receiver Drew Morgan has totaled 15 receptions for 248 yards and two TDs. In Week 2 at No. 15 TCU, he led the way with seven receptions for 93 yards and a TD. Last year against the Aggies, Morgan had eight catches for a career-high 155 yards and a TD.

• A John Mackey Award candidate, tight end Jeremy Sprinkle tied 2010 Mackey Award winner D.J. Williams for first in program history in touchdown catches (10) among tight ends when he hauled in his third touchdown grab of the season in the second quarter last Saturday. Sprinkle is the only SEC tight end and one of two nationally with a touchdown reception in each of the first three weeks.

Five Key Storylines
• Arkansas improved to 3-0 for the second time in the Bret Bielema era and the seventh time since 1998 with a 42-3 victory over Texas State at home last Saturday.

• Fresh off the convincing victory, Arkansas made big moves in each of the national polls released on Sunday. After earning a No. 24 ranking in both polls last week, the Razorbacks moved up seven spots in the Associated Press Poll to No. 17 and up six spots to No. 18 in the Amway Coaches Poll. The No. 17 ranking in the AP Poll is Arkansas’ highest since Sept. 8, 2012 when it was No. 8.

• Arkansas has won five straight and nine of its last 10 games dating back to last season, including road wins at No. 18 Ole Miss, No. 9 LSU and No. 15 TCU.

• Austin Allen and Rawleigh Williams III have been one of the best QB/RB combos in the SEC this season. Allen has tossed multiple TD passes in three straight games, leads the SEC in completion percentage (67.1) and ranks second in passer rating (160.9). Williams has topped 100-yards rushing in each of the last two games and leads the SEC in rush attempts (71), first downs (20) and 10+ yard runs (13) while ranking third in yards (354). In addition, Williams is one of only four players in the Power 5 conferences to total at least 350 rushing yards and three rushing TDs through three games this season.