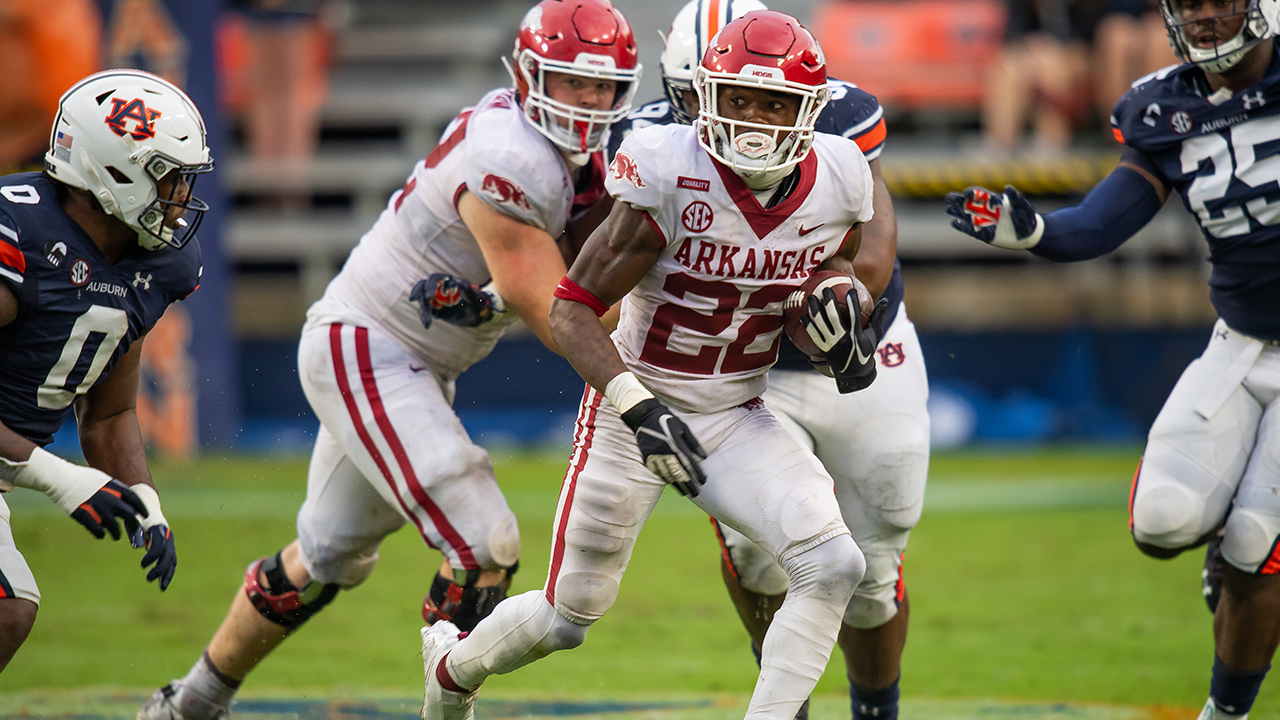 Arkansas returns home after a two-game road swing to host Ole Miss for Homecoming at 2:30 p.m. CT on Saturday, Oct. 17. The game will air on SEC Network.

1. – Arkansas came up just short in last week’s game, falling 30-28 at No. 13 Auburn as the Tigers made a game-winning field goal with seven seconds left in the fourth quarter. The Razorbacks were trailing 17-0 midway through the second quarter but showed resiliency and took a 28-27 lead with 5:29 left in the final stanza. The offense found its groove by racking up a season-high 437 total yards, its most in an SEC game since compiling 447 yards against Vanderbilt two seasons ago.

The only two players to rack up 70+ yards rushing and receiving in a single game this season: Trelon Smith and Travis Etienne. #WPS pic.twitter.com/AQXWtYe9Sp

3. – Graduate transfer QB Feleipe Franks eclipsed the 300-yard mark for the first time in his career, throwing for a career-best 318 passing yards with four touchdowns last week at No. 13 Auburn. The Florida transfer became the first Razorback signal caller to throw at least four touchdowns passes since Brandon Allen (7) in 2015 against Mississippi State. Over his last two games, Franks has thrown for 530 yards and six touchdowns without an interception. He ranks fifth in the SEC in passing touchdowns (7), sixth in completion percentage (64.9%) and seventh in passing yards (730).

4. – Junior LB Bumper Pool and redshirt freshman DB Jalen Catalon are each averaging 12.0 tackles per game to lead the SEC and rank second nationally. Catalon also leads the country, making 8.7 solo stops per game, and is coming off a career-high 14 tackle outing at No. 13 Auburn.

5. – Veteran WR De’Vion Warren has jumped out to a fast start in his senior campaign, leading Arkansas with 223 receiving yards and three touchdown catches. A week after earning his first career 100-yard receiving game in the upset win at No. 16 Mississippi State, Warren made a career-high five catches for 95 yards and scored two touchdowns for the first time in his career at No. 13 Auburn. His average of 22.3 yards per reception ranks third in the SEC and 14th nationally.

Get Warren the ball and let him work. pic.twitter.com/oGqoFHBnMe

7. – Earlier this week, sophomore center Ricky Stromberg was named to the Rimington Trophy Watch List, which recognizes the nation’s best center. The Tulsa, Okla. product has started all three games at center this season after making 11 starts at left and right guard last year.

8. – Arkansas’ defense has tightened up this year on third down, allowing opponents to convert just 34.6% of their tries, which ranks fifth in the SEC and 25th nationally. The Hogs are keeping opposing offenses off schedule, forcing an average third down conversion distance of 6.5 yards.

9. – For the 67th time, the Hogs and Rebels will meet on the gridiron, with Arkansas leading the all-time series, 36-27-1. The two have a deep history before Arkansas joined the SEC in 1992 and first met on Oct. 10, 1908, a 33-0 Razorback victory in Fayetteville. Meetings during the 1950s and 1960s routinely pitted the top teams of the Southwest and Southeastern Conferences against each other. The respective conference champions met on Oct. 23, 1954 in Little Rock and Arkansas’ 6-0 win on a 66-yard touchdown pass from Bob Benson to Preston Carpenter, known as the “Powder River Play,” remains a marquee win in program history. The Razorbacks are 11-2 all-time in Fayetteville against the Rebels. The series has been tightly contested of late, as the margin of victory has been four points or fewer in four of the last five meetings.

10. – This season, Ole Miss possesses one of highest-powered offenses in the country, ranking second nationally and leading the SEC averaging 573 yards per game. However, the Rebels defense ranks 14th in the league allowing 641.3 yards per game. QB Matt Corral has thrown for 1,080 yards and nine scores with WR Elijah Moore serving as his top target, making 31 catches for 462 yards. The Rebels are under the direction of first-year head coach Lane Kiffin, who previously made head coaching stops at Florida Atlantic, USC, Tennessee and the NFL’s Oakland Raiders.