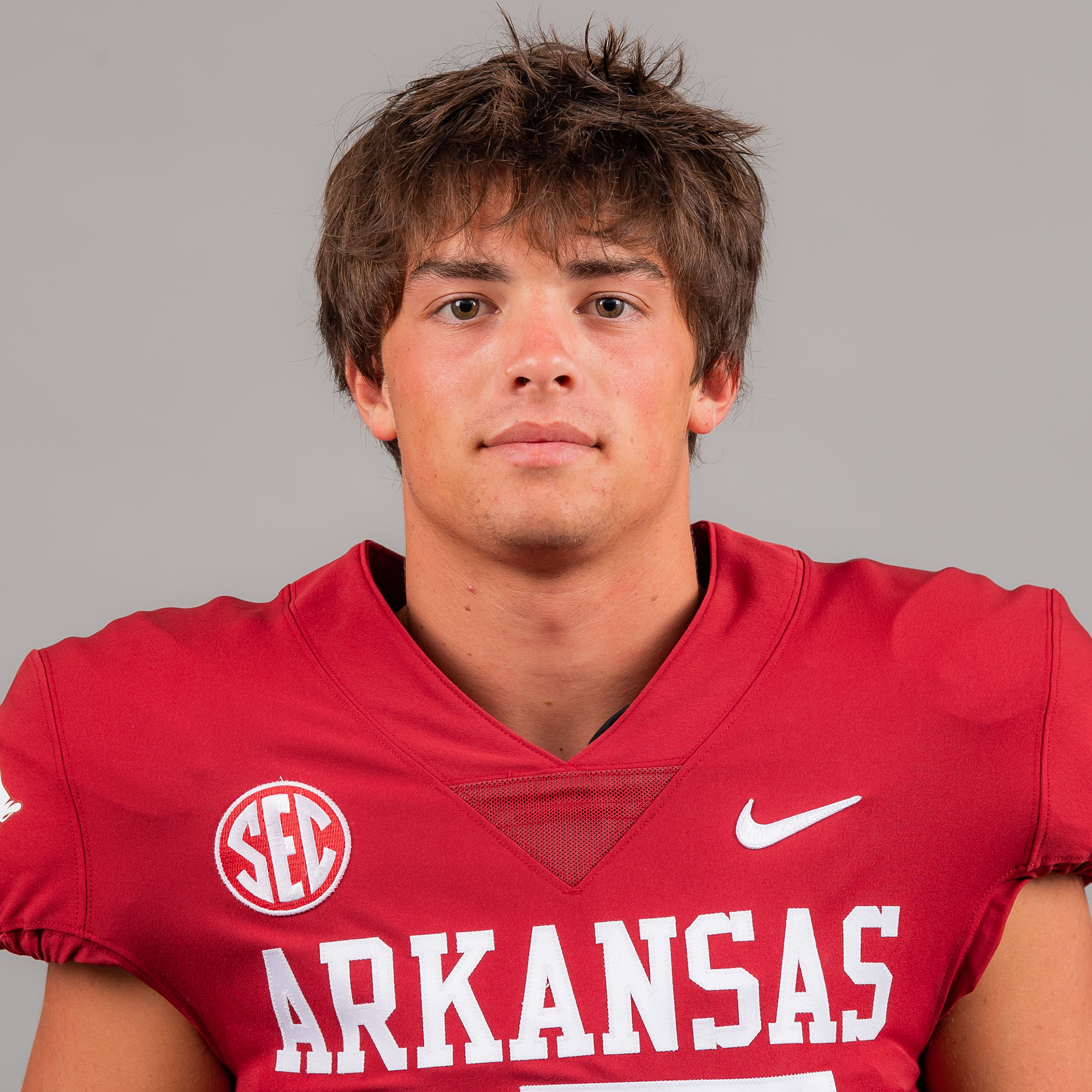 HIGH SCHOOL: Set numerous Arkansas high school state records in a multitude of offensive categories … Three-year varsity letterwinner for head coach Kevin Kelley at Pulaski Academy in Little Rock … Part of a Bruins program that reached the Arkansas 5A State Championship game in each of his three seasons and won two state titles … Totaled a 38-4 record during his three years of varsity action … Tabbed the 2019 Farm Bureau Insurance Arkansas 5A Offensive Player of the Year As a senior … Named MaxPreps State Player of the Year and MaxPreps All-State Team … Played in 41 career games and threw for a staggering 10,468 yards with a completion percentage of 68.5% (695-for-1015) while tossing 114 touchdown passes to just 21 interceptions … Ran for 1,856 career rushing yards (6.1 ypc) and scored 20 touchdowns … Ranks ninth in both career passing yards (10,468) and career touchdown passes (114) in the state of Arkansas’ high school history… Posted eye-popping statistics his 2019 senior season leading the nation in both passing yards (5,196 yards), which ranks fifth most for a single-season in Arkansas state history, and total yards (6,022 yards) … As a senior completed 327-of-483 pass attempts for 5,196 yards with 51 touchdowns to just 10 interceptions while averaging 399.7 passing yards per game over 13 games played … Also ran 116 times for 826 yards (7.1 ypc) with eight scores … Averaged 399.7 passing yards per game, which ranks third for a single-season in state history …  In the 2019 season opener threw for an Arkansas state record 764 yards (35-of-42) versus Springdale Har-Ber, which also ranks ninth nationally ever for a single-game according to USA Today High School Sports … Rolled up 900 total yards (136 rushing yards) and accounted for 10 touchdowns (nine passing, one rushing) against Springdale Har-Ber in an 84-68 win, which was two points shy of setting the state record for most combined points in a game … Nine passing touchdowns against Springdale Har-Ber ranks second in a single-game in state history … Posted 521 passing yards and 119 rushing yards in the first half against Springdale Har-Ber … 1,025 team total yards is the most in a single-game in Arkansas state history, while the 84 points scored are fourth-most in a single-game … Threw for 619 yards (39-of-54), the fifth most yards in a single-game in state history, in a 63-61 loss to Little Rock Christian Academy … Catalyst of an offense that reached the top-10 in state history for most yards in a single-game four times in 2019 (1,025 vs. Springdale Har-Ber – 1st; 857 vs. Little Rock Christian – 4th; 807 vs. Morrilton – 7th; 795 vs. Little Rock Parkview – 9th)… Captured the 5A state championship by trouncing Little Rock Christian Academy 63-21 while totaling 439 passing yards (38-of-49) with five touchdowns and was named championship game MVP … The performance ranks seventh most in state history for most passing yards in a championship game and tied for seventh in passing touchdowns … As a team the Bruins accrued 766 total yards, the most in a championship game in state history … Led the juggernaut Pulaski Academy offense to team statistical Arkansas state records of 9,065 total yards, 647.5 total yards per game, 790 total points, and 56.4 points per game … The team also ranks second in the state record book with 106 total touchdowns and third with 6,137 passing yards … Finished the 2019 season with a 12-2 overall record … Played in 14 contests and completed 316-of-466 pass attempts during 2018 junior season, registering 4,733 passing yards with 57 touchdown passes to 11 interceptions … Additionally ran 125 times for 707 yards (5.7 ypc) and scored eight touchdowns … Finished the season 12-2, but fell in the state championship to Little Rock Christian Academy, 52-38 … Despite the loss threw for 417 yards (30-of-50) which ranks seventh in a single state championship game in state history, and five passing touchdowns, which is tied for seventh most … Appeared in all 14 games as a sophomore completing 52-of-66 pass attempts totaling 539 yards with six touchdowns to zero interceptions … Tallied 323 rushing yards on 61 carries (5.3 ypc) … Served as the backup on Pulaski Academy’s fourth consecutive state championship team that defeated McClellan 37-36, and finished 14-0 … Part of the 2017 offense that ranks inside the top-10 in numerous state categories … Also played lacrosse and scored 10 goals with three assists his junior season… CHOSE ARKANSAS OVER: SMU and others.