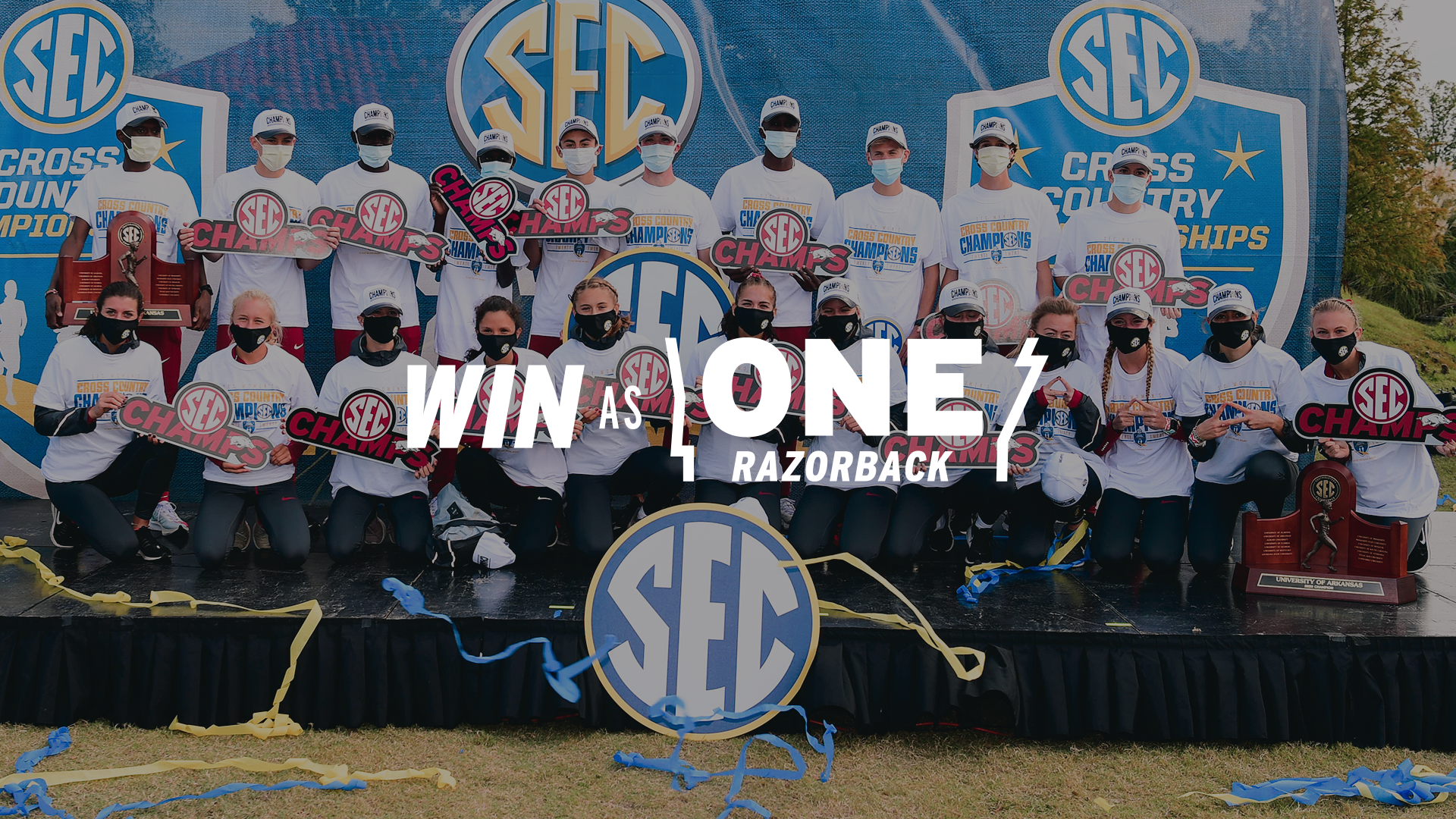 From the Desk of Hunter Yurachek

The more things change, the more some things stay the same. In a year of uncertainty, the championship dominance of Arkansas Cross Country and Track and Field certainly remains the same. Last Friday, once again, the Arkansas men’s and women’s cross country teams stood atop the awards podium after clinching the first conference titles of the year at the SEC Cross Country Championships in Baton Rouge, Louisiana.

For Coach Lance Harter and the women’s cross country team it was the eighth-consecutive SEC cross country title. The Razorback women’s team has won 10-straight cross country races, dating back to last season. The defending national champion Razorbacks will have to wait until the spring to defend its title as the NCAA has moved the cross country national meet to the spring.

Seeking a Razorback Repeat
Speaking of defending a SEC championship, our soccer team is on the cusp of earning an SEC regular season championship repeat. Coach Colby Hale’s squad is 6-1 on the season and clinched a SEC Western Division crown last Friday with a 2-1 victory over Auburn in the home finale. With a win at Mississippi State this Friday, Arkansas would secure another regular season title. The Razorbacks are currently tied with South Carolina in the standings. Arkansas will then turn its sights to the SEC Soccer Tournament in Orange Beach, Alabama (November 13-22, 2020).

Top Hogs
Arkansas Volleyball is also off to a great start (4-0) and is tied for the lead in the SEC entering this week’s matches. Coach Jason Watson and his team have swept the first two conference weekends at Mississippi State and at home last weekend against Ole Miss. The Razorbacks return to action on Wednesday and Thursday of this week with matches at Missouri. Both matches will be televised – Wednesday on ESPNU and Thursday on the SEC Network.

Moving Forward with Football
Exciting things are happening in Razorback Football! Coach Sam Pittman has the Hogs battling toe to toe with some of the top teams in the nation each week. Arkansas has a pair of wins on the season, including wins over No. 16 Mississippi State and a Homecoming victory over Ole Miss. The Razorbacks return to action this weekend in Fayetteville when the Tennessee Volunteers visit Donald W. Reynolds Razorback Stadium. The game is set for 6:30 p.m. and will be televised on the SEC Network.

Voting Razorbacks
Over the past few months, our Hogs UNITED program has been working to educate and provide opportunities for our student-athletes to have their voices heard at the ballot box. Four on-site voter registration and absentee ballot request opportunities were offered on multiple days, including on National Voter Registration Day. Hogs UNITED hosted Darcy Anderson, a former Congressional Chief of Staff, for three voter education events leading up to the election. Thanks to the efforts of Hogs UNITED, 82% of all Razorback student-athletes were registered to vote, with three teams having 100% of their eligible student-athletes registered.

In conjunction with the NCAA, all mandatory athletics related activities were canceled on Election Day. For the first time, the University of Arkansas campus hosted an early voting site at Bud Walton Arena, giving student-athletes and others in the community another convenient option to cast their ballots. It all adds up to yet another way, we continue to Build Champions and Razorbacks for Life!

If you are headed to Bud Walton Arena this season, please note that doors will open one hour (60 minutes) prior to tip-off for BOTH men’s and women’s basketball. Just as in football, tickets will be mobile-only for the upcoming seasons. Tickets and applicable parking will be distributed approximately a week prior to the first games. Also note that the clear bag policy remains in effect as will a security screening including metal detectors.

Masks will be required at all times, other than when actively eating or drinking. In addition, protocols used in football (i.e. social distancing, enhanced arena sanitization etc.) will be also utilized at Bud Walton Arena as well.

Calling all Students for BWA Live

University of Arkansas students have an opportunity to preview this year’s men’s basketball team at an exclusive student-only event on Thursday, November 12. UA students can join us at Bud Walton Arena for free food, t-shirts and an exciting night of Razorback Basketball.

This event will be limited to students only, which means any student who wants to attend is free to come. Our goal is to create a safe and socially-distanced environment to get students and our team excited for the upcoming season. Please note masks are required.

COVID Update
As cases around us and around the nation continue to escalate, Razorback student-athletes continue to do a tremendous job with our COVID-19 protocols and safety precautions. Even as testing has increased with more teams in active competition, our positive cases continue to remain well below averages in our area and in other athletics programs around the country. We have come a long way to this point, but we must remain vigilant as we head into our winter sports. I would also ask our fans to do their part as well to give our student-athletes a chance to compete. Wear a mask, maintain social distancing, and Call the Hogs!!

A brief update and some clarification on our Southwest Classic series in football with Texas A&M. Last weekend, due to the pandemic and the 2020 limited conference only schedule, we played the Aggies in College Station, rather than in Arlington. The move was made based on the extenuating circumstances surrounding this season.

When the move was initially made, I expressed a desire to explore an opportunity to play a game in Arkansas as well. However, based on discussions around our existing agreement, it became apparent that the addition of another on-campus game as part of a traditional 2021 schedule would likely necessitate an extension of that agreement beyond 2024. While we have certainly enjoyed this long-standing series at AT&T Stadium, I did not feel that it was appropriate to make a decision on extending the agreement at this time.

Therefore, the 2021 game remains scheduled for AT&T Stadium in Arlington. If circumstances, once again, dictate other considerations, I am confident that the Jones Family, our partners at AT&T Stadium and Texas A&M would be supportive of our efforts to find an appropriate solution.

The University of Arkansas will be adding to its championship legacy by hosting four future NCAA postseason events, including the 2026 NCAA Men’s and Women’s Indoor Track and Field Championships, as announced recently by the NCAA.